Helen Heagren, from Grimsby, was diagnosed with ovarian cancer in 2016. Six years later, she is living with cancer and has shared her story in the hope that it will help others to become aware of the symptoms and know that support is available.

In 2015, Helen was living in Essex and worked as a Teaching Assistant. In the run up to her 50th birthday, she noticed her weight had ‘crept up’ and decided she was going to fit and drop a few dress sizes.

“Having set myself target of becoming a size 12, I joined a local gym and took part in dance and aerobic classes most days. After 10 months, I managed to reach my weight loss target however, I still had a little belly so I decided to keep going.

“One Saturday morning, whilst doing pelvic exercises, I felt something strange move and it played on my mind after the class, although I can’t really say why. I decided to contact my GP and an appointment was made for three weeks later. 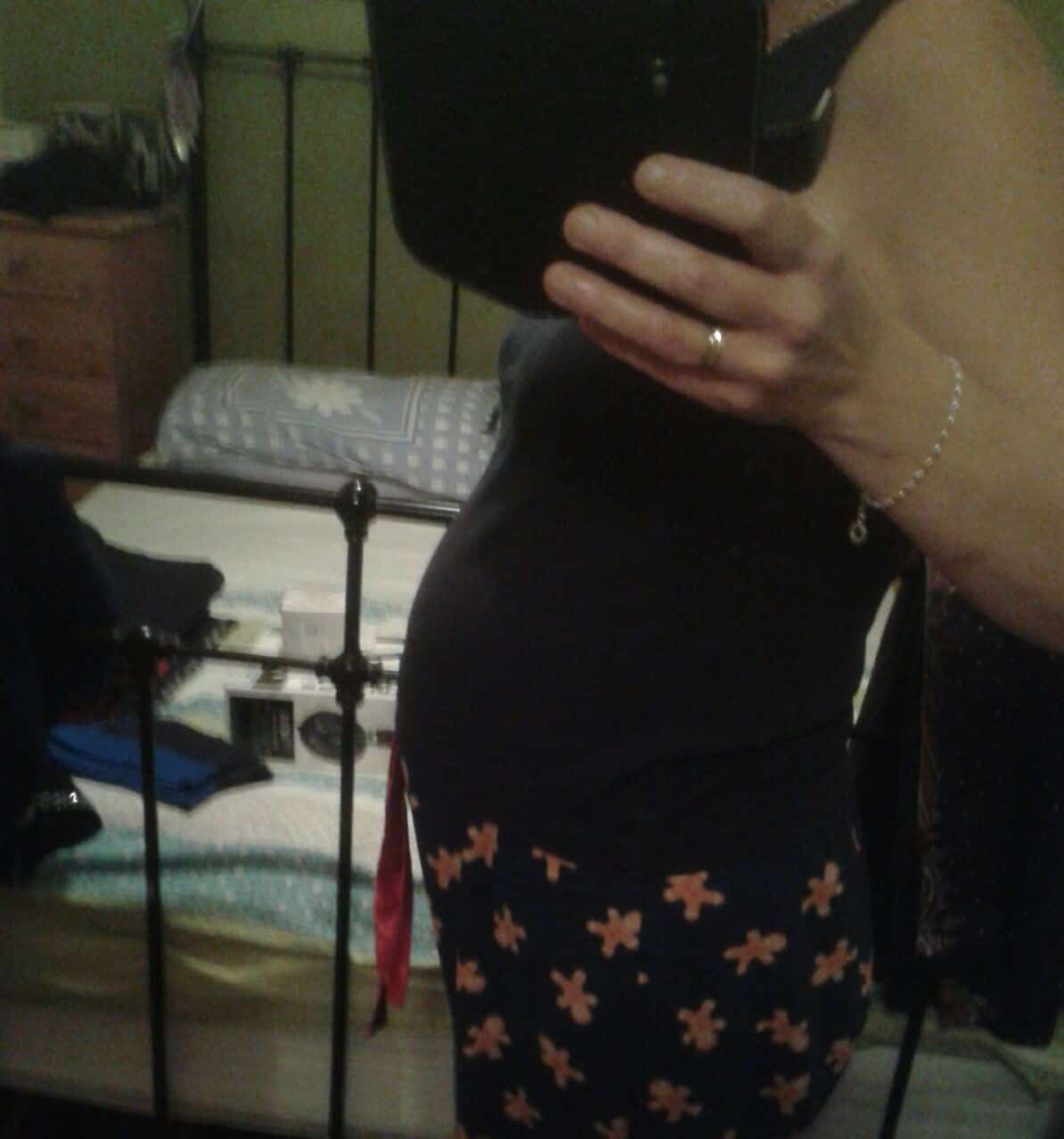 “Whilst waiting for my appointment, I noticed my belly had started to expand and it looked like I was pregnant. Although pregnancy tests were saying I wasn’t, a concerned colleague who had also noticed that my belly was expanding quickly, advised me to see a GP urgently.

“I walked into the GP Surgery on 24th November 2015.  My GP examined me and thought I had Ovarian cysts. She arranged for me to have an ultrasound for the following morning at my local hospital.

“The next few weeks flew by with appointments, scans and a biopsy. Nine litres of fluid were removed but it quickly built up again and I was taken into hospital on New Year’s Eve in 2015 to have another eight litres drained. They then fitted a permanent drainage bag and at this point the word cancer had not been mentioned at all.

“In early January 2016, when all my results were back, myself and my husband were called to have a meeting with an Oncologist. There was also a nurse in the room who introduced herself as Tina. It was then I was told I’d been diagnosed with Stage 4 ovarian cancer. Wow. My emotions were all over the place. Cancer? Really? How? Why? Ovarian Cancer? Why don’t I know about this? What are and were the symptoms? I don’t feel ill. What is stage 4? Am I going to die? No one in my family has had cancer. Are they sure? So many questions.”

Helen’s Oncologist explained the options available, including information about trials. Helen accepted a clinical trial for a new drug call Avastin, which had shown good results in other cancers, and also started chemotherapy in February 2016.

“I have so many funny stories from the chemo room. I did try to be good but things just went wrong. For example, in my first session, I sat next to a lovely old man who was receiving treatment for throat cancer. 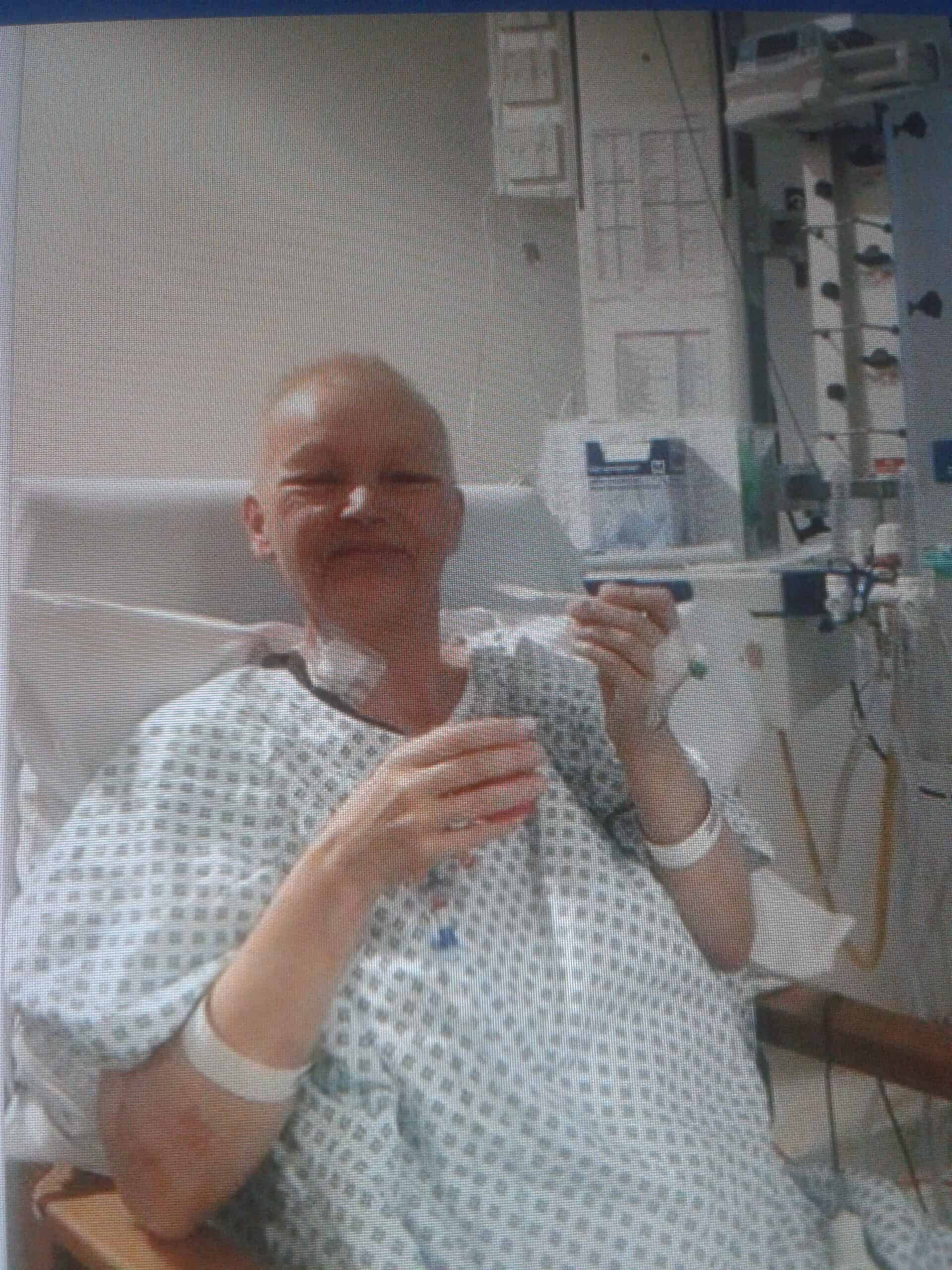 “I needed the toilet, so I unplugged my chemo stand on wheels and off I went. People around me started shouting “stop”,” look!” and I was mortified to see I had unplugged the wrong stand and was bringing the elderly man with me! Gosh, he and his wife did laugh and all the nurses came running.

“After three chemotherapy sessions, I went to a hospital in London for a full hysterectomy. The surgeon who carried out the operation spotted that it had spread to my bowel and other areas, so I had a stoma fitted. In total my surgery was 9 hours. I still have the stoma bag today and know now that this can happen with ovarian cancer.

“After my surgery, when I was fit enough, I went back to chemo and Avastin. I was also offered a genetic test which proved to be positive for the BRCA 1 gene. The enabled my mum, siblings, and son to be tested to see if anyone else had the gene. That was the scariest time.”

Helen was advised by her Clinical Nurse Specialist to look up some Ovarian cancer online charity groups and after looking at a few websites, Helen decided Target Ovarian Cancer was best for her.

“Their website was what I was looking for. I could find information about research and trials, and there was a nurse on hand that you could phone. In lockdown, they did some fabulous zoom seminars with clinicians that covered so many topics on ovarian cancer. There was also an online chat group which was full of valuable information and helped me to meet some ladies locally that I now catch up with over coffee and cake.

“There were also things I could involve myself in to help raise awareness and, as a person who has ovaries but who didn’t know much about the disease before my diagnosis, that is what I chose to do.

“As part of one of Target Ovarian’s awareness campaigns, I was lucky enough and honoured to be invited to Westminster to speak in Parliament. I also joined in with Target Ovarian‘s annual awareness walk at the Olympic Park and had fabulous fun with some amazing people and families.

“My family and friends have also helped to raise awareness for the charity. My brother is a keen cyclist and managed to get a charity place for RideLondon, so he can proudly say he’s ridden the Olympic 2012 course twice now. My friend’s husband completed it too, which allowed him to tick off a bucket list challenge whilst raising much needed funds and awareness for the charity.” 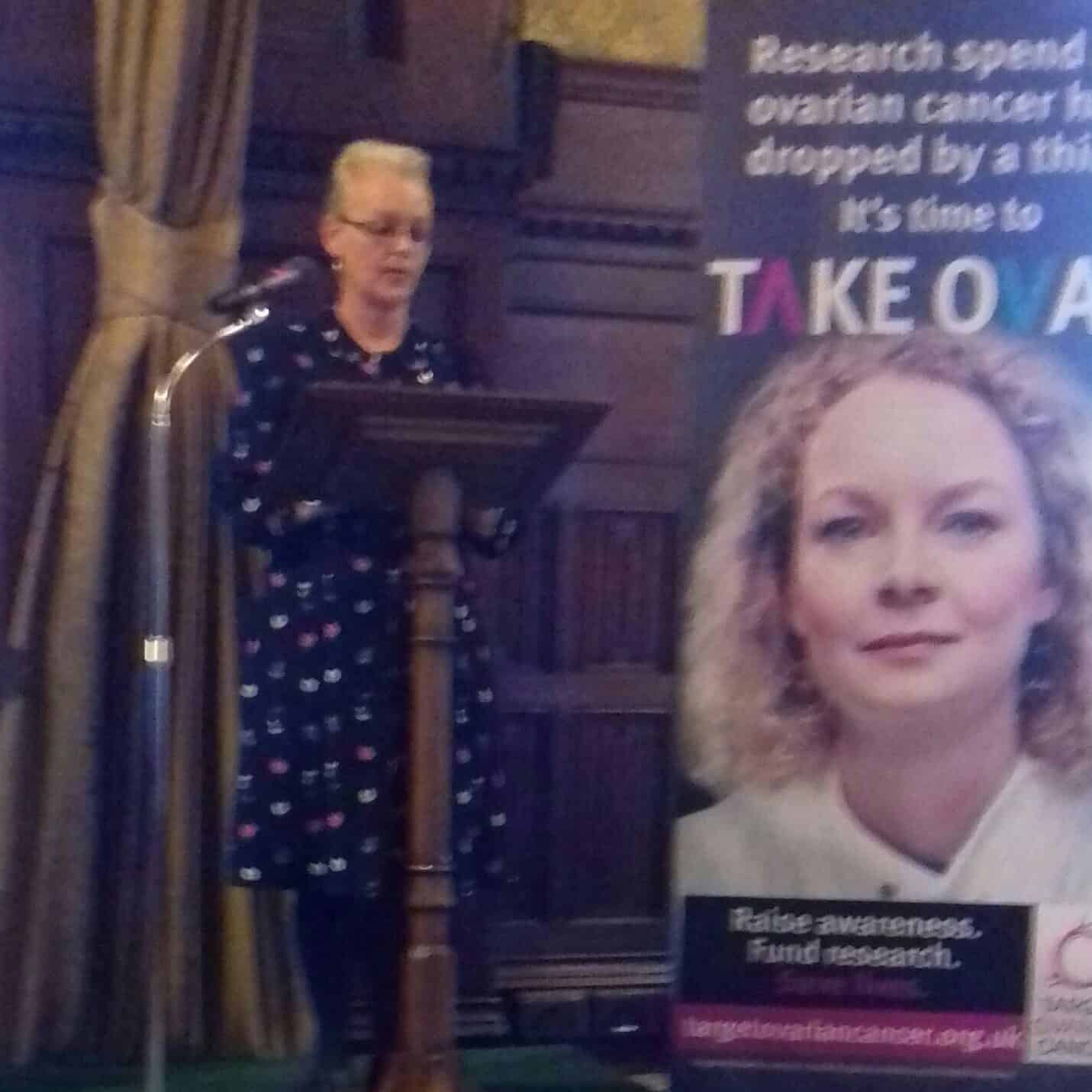 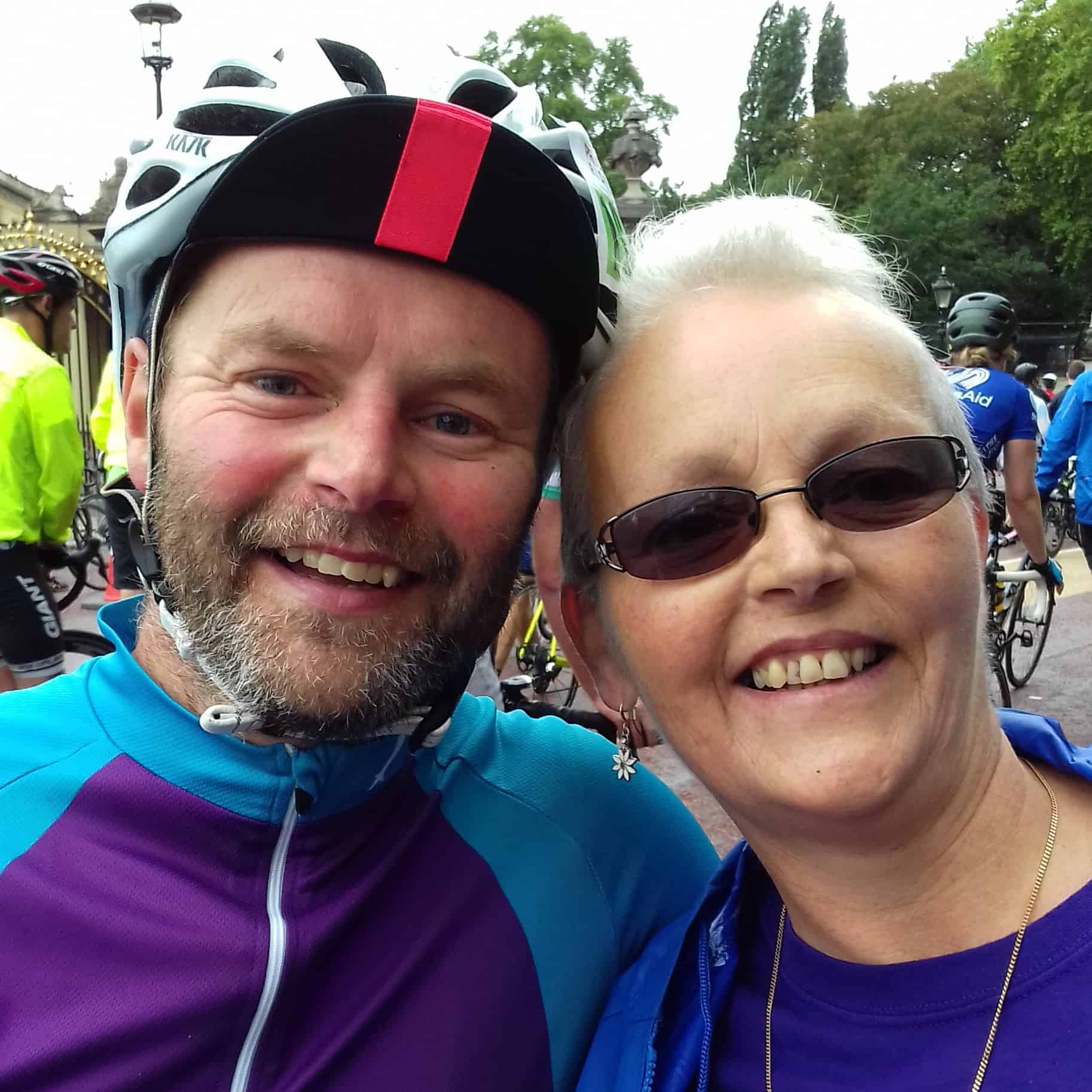 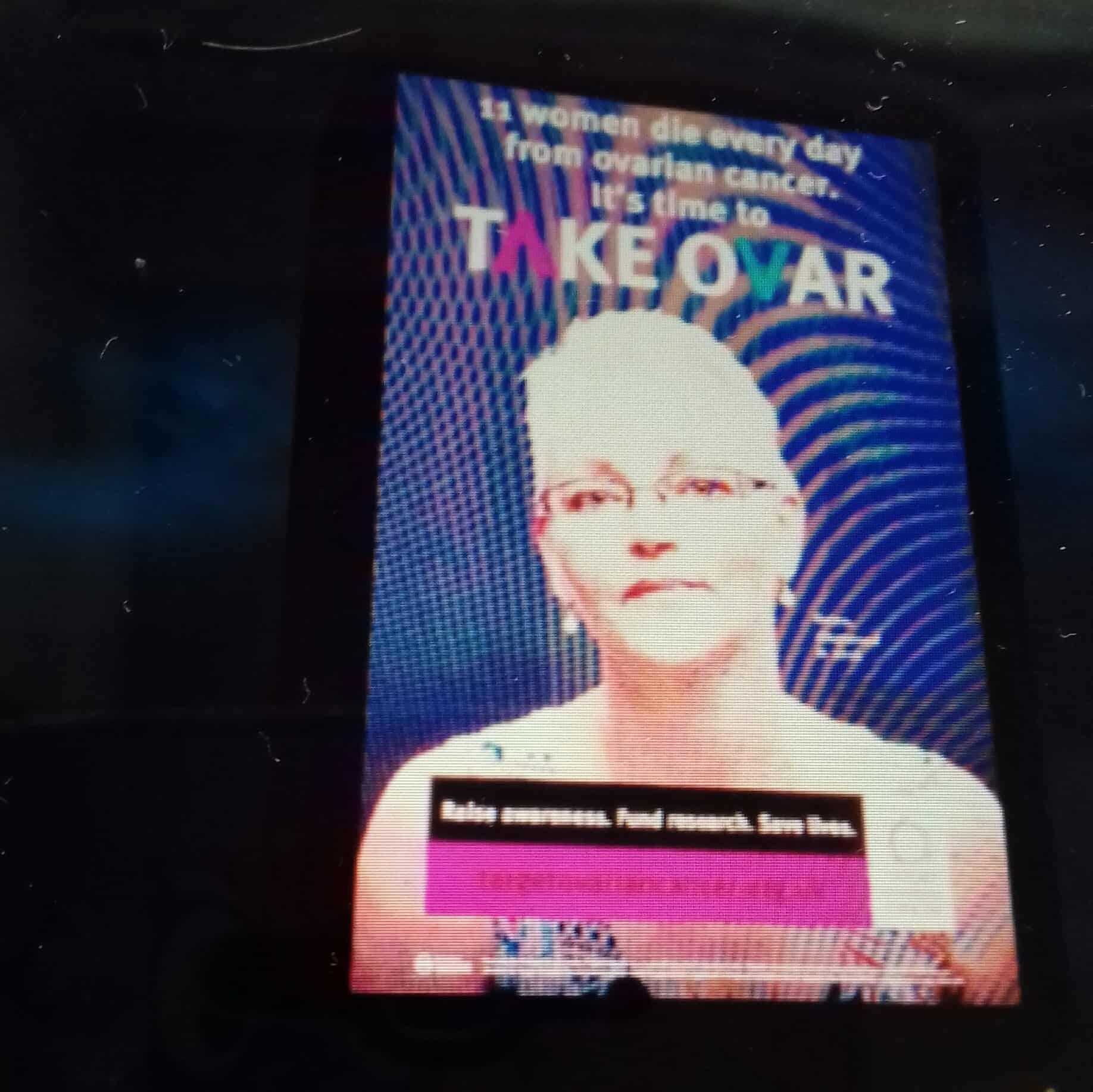 Helen is now in her sixth year of living with ovarian cancer and hopes to help people talk about their ovaries more freely.

“The thing with ovarian cancer is that it doesn’t care who you are. It was always thought of an ‘older ladies’ cancer but it really doesn’t care what age you are.

“If your ovaries work then you should know the symptoms: bloating, needing to wee more, difficulty eating a full meal, feeling full, persistent pelvic or abdominal pain. I also suffered with backache.

“I have been amazed by the lack of education on ovarian cancer, especially about cervical screening not detecting ovarian cysts of cancer. I think there is a lot of misinformation about this and it’s important to know that cervical screening does not detect ovarian cysts or cancer. It would be great if they included information about this, and the symptoms of ovarian cancer, when giving talks about puberty to people in older years at schools.

“I’m currently having my fourth cycle of chemotherapy. I’m incurable and on maintenance treatment, which is keeping the Cancer at bay. I also have regular scans which gives my peace of mind that I know what it’s up to.

New treatments and drugs are being developed and evolving all the time. Some will suit and some won’t, so we need to find the one that does. Walking and climbing the stairs affects me getting out of breath but I do everything in my own time.

I am getting on with my life, especially after Covid-19 put a halt to things I had wanted or planned to do. I’ve resumed going to the Theatre in the West End and enjoy watching touring bands and musicals in Hull and Grimsby. I now meet friends for brunch, and I’ve been on the back of my friend’s Harley Davidson, which I wanted to do. 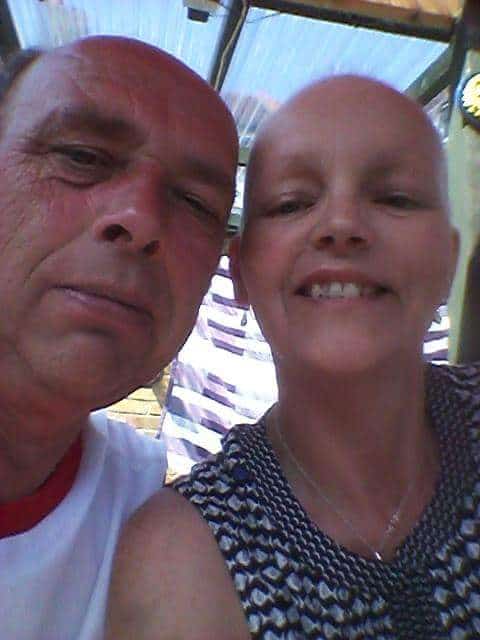 I hate heights but was challenged to walk over the O2 with a friend. It took a while, and the guide put us at the back which was hilarious, but we did it.

I’ve also joined groups locally recommended by St Andrews Hospice and Macmillan and I’m really enjoying meeting the different characters. It’s not morbid as I thought and they are a positive bunch, like me. We chat about anything and have fun. We do have a moan too, but that’s life isn’t it.

So, I’m still living my life. I just carry extra baggage. My message to anyone with ovaries is this: